While in college I loved playing capture the flag in the videogame Halo. The game pits two teams against each other where the objective is to capture the flag from the other team’s base while being shot at by opposing space marines. I was a terrible shot and performed dismally in other game modes, but in capture the flag I was consistently the best on my team. Why? Because during every match, while opposing teams were developing elaborate strategies and seeking the “perfect” sniping position, I ran straight for the flag as fast as possible and before anyone realized I had already captured the flag and was running back to score.

This strategy can be described as reflective action or learning by doing,[1] and in fast paced markets it is a necessity.  Innovation always requires (to a degree) abandoning control and accepting risk knowing that walking into chaos is the only way to grow.  In both my former career as a history teacher and my current career managing engineers, I am always amazed at how well people fool themselves into thinking they can plan their way to the finish instead of accepting that there are often too many unknowns for things to ever go as planned. 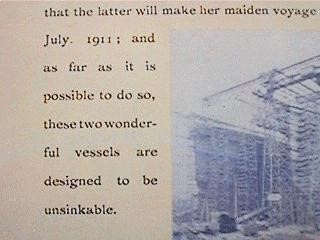 Photo credit: The last page of the 1910 White Star publicity brochure for the Titanic and Olympic ships

Conversely, we should also be wary of the organizations that are serial under-planners.  “Emergent Strategy” is the new business buzzword, which, like every new business philosophy, is being abused as a justification for management to abdicate all responsibility.

Videogame fans refer to this as the “Leeroy Jenkins” strategy, or the illusion that since many plans are faulty at best, the only sensible solution is to move forward with no regard for planning. You can easily identify organizations that adhere to this philosophy when everyone you talk to exclaims that they are “so busy,” and yet nothing ever seems to get done.

So how do we avoid the hubris of planning without becoming prey to the deception of senseless action?  Discipline systems.  Discipline systems are, simply put, training and practice in skills that are known to have measurable benefits regardless of direction or external disturbances. Organizations with strong Discipline Systems progress in-spite of plan failures and often without centralized direction.

Discipline systems are the foundation of promoting innovation, because without them any plan is destined to fail the moment an unforeseen obstacle arises, and without the clear growth provided by discipline systems, an organization without plans will navel-gaze itself into oblivion.  Examples of discipline systems include training and practice in the following (Many of these systems will be expanded in other posts):

How could your business benefit from a greater focus on discipline systems? Let me hear from you below!

View all posts by Casey Baker