In the early 1970s, the Route 128 corridor in Boston, Massachusetts was poised to become the epicenter of the computer revolution.  Research powerhouses MIT and Harvard were surrounded by a burgeoning digital technology industry and large, well-developed business financing institutions were widely available.  However, throughout the 1970’s and 1980’s tech innovation in the Boston area paled in comparison to the exploding Silicon Valley area in California, which by 1994, according to AnnaLee Saxenian (who literally wrote the book on the subject) boasted over four times as many billion dollar technology companies than Route 128.  The diverging success of Silicon Valley relative to the stagnation of Boston’s entrepreneurship arena has continued well into this century; as can be shown clearly using a list of the top tech companies in both areas:

There are many complex reasons for this difference in success, from the variance in access to Asian markets to the cultural dissimilarities in acceptance of entrepreneurship, but the most significant difference (and really the only one leaders can control) was Silicon Valley’s development of network-based collaboration across the community as opposed to the vertically integrated, large, and independent firm structure of New England.

Successful innovation is grown democratically, not through centralized, master planned organizations (recall how firms that fail to allow for the absorption of chaos wither away). Furthermore, collaboration among diverse disciplines throughout the industry instead of secretive individual research is becoming recognized as a primary driver of innovation.  Finally, the reality of the business world is that discipline systems must form the foundation of any innovation effort, lest the effort become the aimless money-pits of corporate Skunk Works.  Using these maxims, we can create the following model for collaborative innovation: 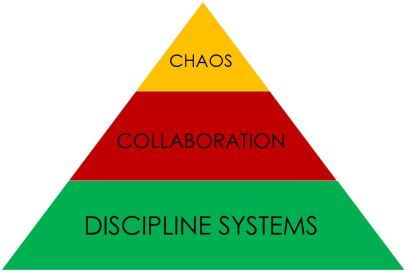 Now MBA’s in the crowd, I know what you’re thinking: Well this is easy to implement, this is practically just a corporate structure… 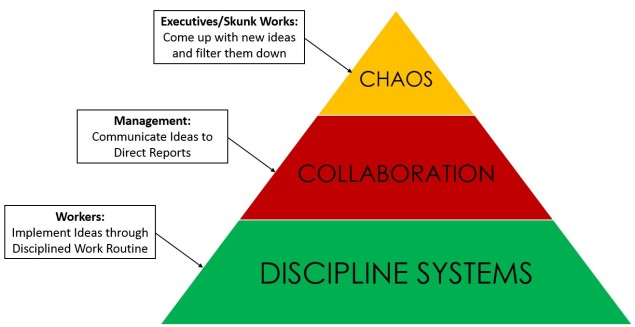 The pyramid model is for one person (or node) in organization, NOT a diagram of the organization itself. These nodes must be arranged in a network for the model to work.  Individuals in the organization must practice their own discipline systems, collaborate with each other, and most importantly all employees should be encouraged to walk into chaos, it should not be consolidated into a single group.  To put it another way, here is what the model looks like for an organization: 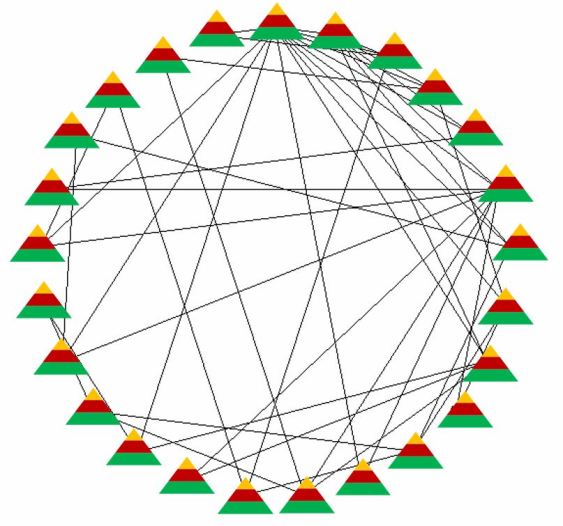 A network of self-reliant, but interdependent nodes.  The risk associated with chaos is spread among the nodes, allowing the organization to accept new information while minimizing the possibility for catastrophic failure.  Some of the most successful organizations in history (GE, Toyota, Berkshire Hathaway, etc.) have developed the network model, and for a company to remain innovative, it is the only way.

If you liked what you read here, please click “follow” in the column on the right to get fresh blog posts about Collaborative Innovation delivered right your email.

View all posts by Casey Baker

3 thoughts on “Putting it all together: All models are wrong, some models are helpful”